How to measure the efficiency of creativity in advertising in 5 steps? - Ekimetrics
Back to all insights

How to measure the efficiency of creativity in advertising in 5 steps? 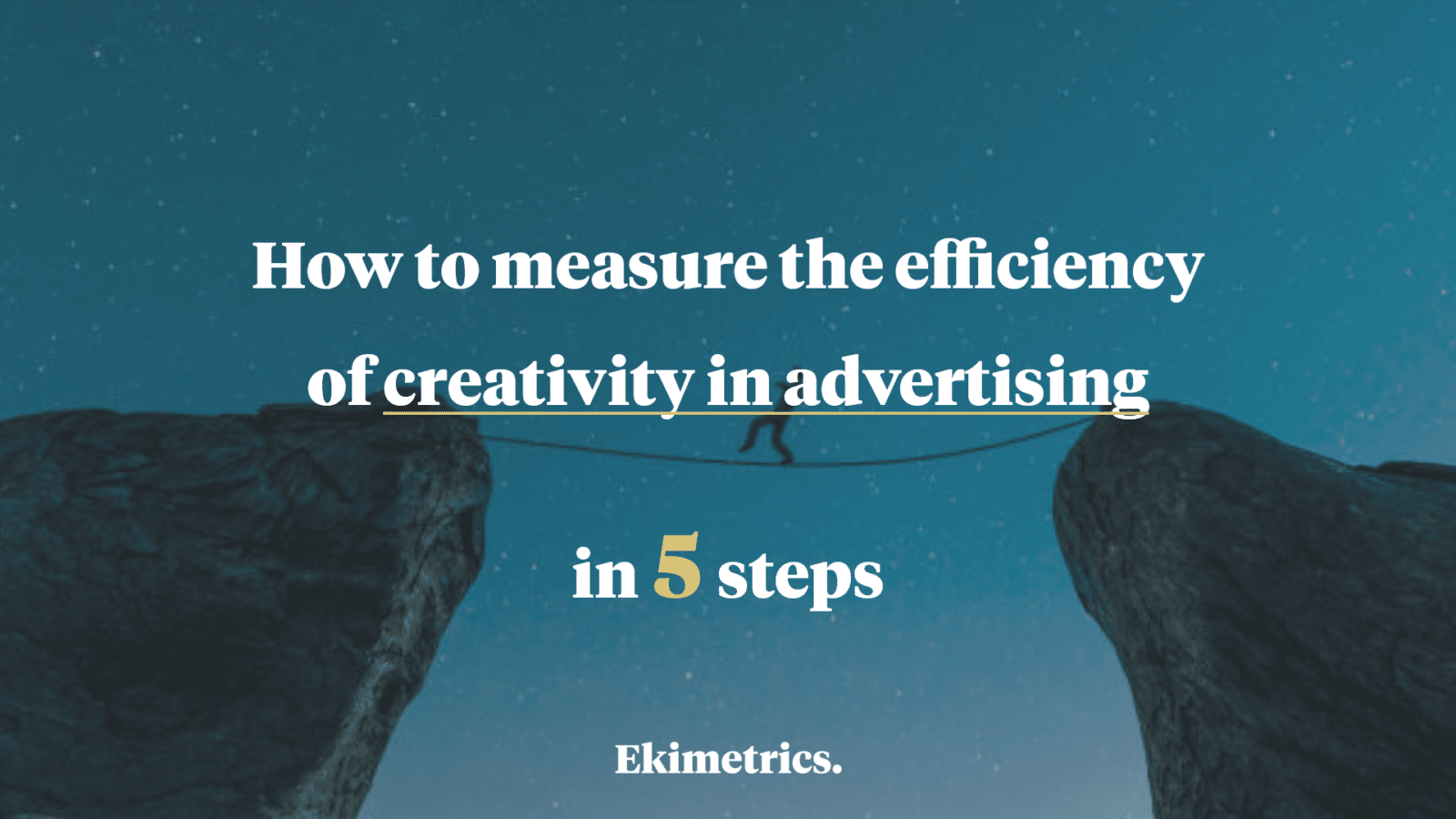 Ekimetrics conducted a study providing a technical Marketing Mix Modelling (MMM) approach (object detection algorithms and multi-stage econometric modelling) that demonstrates an objective approach to creative measurement. Here is an illustrated executive summary of the methodology used to measure the efficiency of creativity in advertising.

To know more about Ekimetrics’ methodology, read these articles on:

One methodology, many different audiences and use cases

The study relies on Meta, focuses on Meta creatives and uses AI to look at 3 billion impressions of nearly 23,000 individual creative images across three and a half years with 124 models. It encompasses multi-stage econometric modelling and Object/text Detection. We used a sample of five brands from the Insurance, Cosmetics, Hospitality and automotive sectors, and 13 related outcome KPIs. We noticed patterns in the features that drive creativity and a higher return on investment. We also spotted the irrelevant features.

The methodology can be applied as a whole, or to answer questions relating to Object Detection (OD), like sponsorship content detection, product placement or MMM Sub-Modelling of Meta or other activity. Indeed, MMM Methodology can be adapted for other investigations into Meta activity, such as creative type, creative placement, format, caption/messaging in creative, etc. The same methodology can also be applied to other social media platforms like YouTube or TikTok.

The creative elements of a campaign are defined by features. Features are objects or sets of objects present in the marketing creative, all of which are identified by object detection algorithms. This includes common objects like people, as well as brand-specific objects, such as a logo or product. Each creative is then codified according to the set of objects, allowing for the creation of time series variables that can be modelled through MMM.

If your coverage is above 100%, you probably have duplicated creatives. The Convolutional Neural Network (CNN) method from the Python library imagededup is efficient at de-duplicating data. Different creative types can be used; in this analysis we used Static, Carousel and Video creatives. Video creatives must be pre-processed. Every 10th frame from videos was extracted, resulting in between 30,000 and 90,000 image files for each brand. All the Data pre-processing was done in Databricks.

The objects used to encompass the creative elements across the four brands are summarized in the table below.

The objective of the selection process is that the features are meaningful to customers, that these appear in creatives from different brands and that these are available in the data. Feasibility and frequency of appearance is crucial.

After determining the broad categories of objects to include in the study, a more involved process was followed for defining the exact objects to be identified.

Objects identified by feature and brand 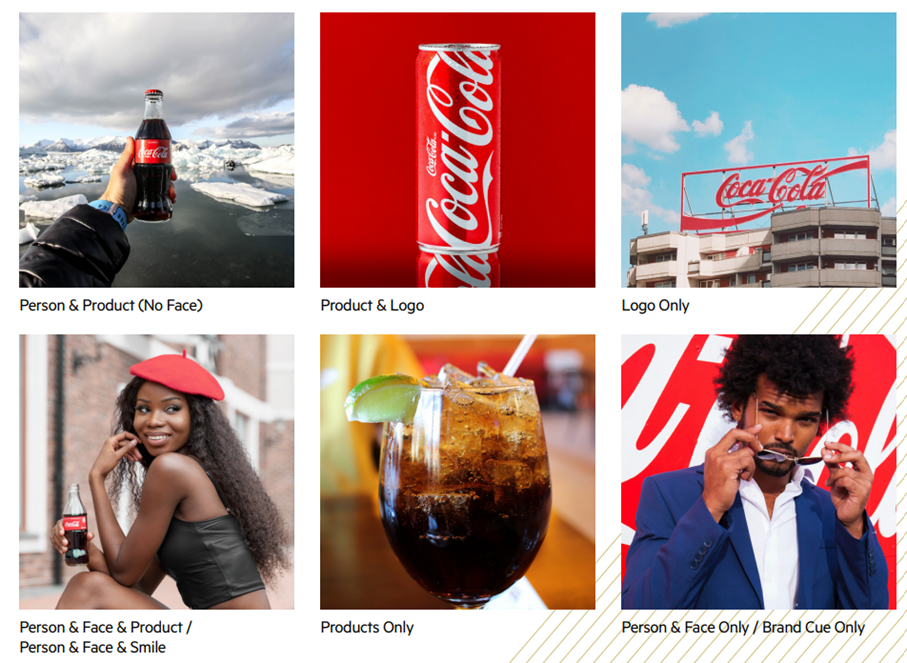 The object detection process relied on a combination of pre-trained and custom trained models from two Python libraries: Tesseract and Detectron2.

The Object Detection workflow is explained below: 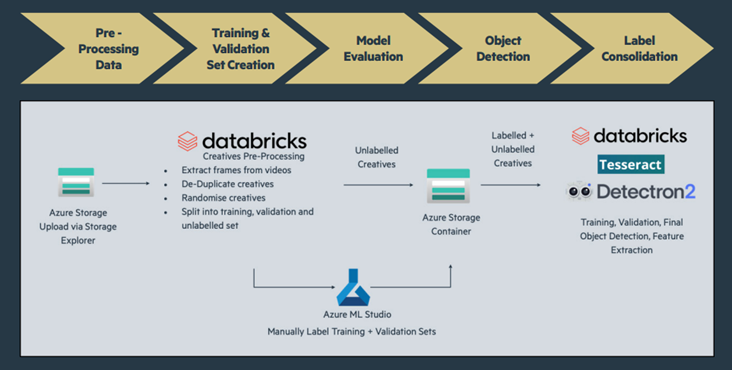 This figure outlines the objects detected by each model type:

During the feature engineering step, the panel data, which would serve as the independent variables for the sub-models in the marketing mix models, is created.

That is, a dataset containing the total sum of impressions and spend associated with each object per day per brand. While only the impressions data was required for the modelling, the spend was used for deriving the ROIs and thus was also needed at an object level. Due to the significant overlap in objects appearing in creatives, e.g. many creatives contained both Logo and Product, using this dataset in the submodels would lead to a poor model performance and would not allow for meaningful insight into the effect of each individual object. Therefore, a separate sub-model was run for each object (feature) or combination of objects.

For example, Logo was modelled separately from Product. By doing this, each object had an associated contribution which could be directly compared to that of other objects. In order to do this, each object variable also had to have a partnering variable which captured the impressions not associated to that object, so that the effect of including the object could be compared with the effect of not including it. This was done for each of the objects detected (see the figure: Creation of logo features & partnering features)

Distribution of impressions for feature by brand 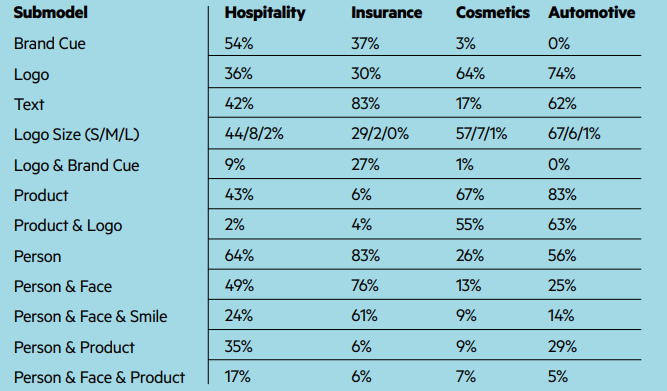 For example, for the Hospitality brand, 54% of the Meta impressions across all the creatives feature a Brand Cue. The percentages sum to more than 100% because an impression can be linked to creatives containing more than one feature.

An optimized two-staged modelling approach was applied to existing MMM models developed by Ekimetrics for a range of brands, products and KPIs. First, the base models were optimized, and second, sub-models were created to explain the variation in Meta contribution using the creative features. Bayesian optimization was used in both steps for variable transformation in relation to lag, adstock and saturation.

The MMM models used in this analysis are multilinear regressions accounting for all significant factors driving the KPI (most commonly sales), including Social Media.

The selection of these models was based on the criteria of model stability (high R2, no autocorrelation, controlled heteroskedasticity) and enough variation in social activity (spend and impressions threshold of 5% per object). Some of the modelling periods were cut to account for sparse data, low correlation between creative impressions and modelled impressions or low variation. Therefore, a trusted relationship from social to the KPI of each MMM was established but could be enhanced by choosing more accurate parameterization of Meta activity through MMM model optimization. See the table below for more details about the models included in the study. 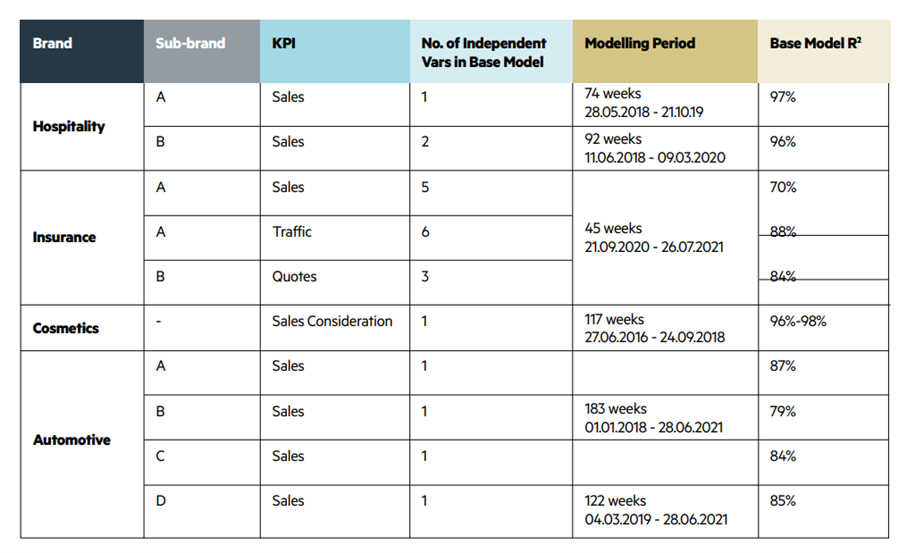 Once the MMM models were optimized, we isolated the impact of Meta on the KPI according to the following relationship:

The Meta contribution became the dependent variable of the Sub-Model, along with the constant and residuals. The object detection impressions timeseries served as the explanatory variables. The objective of this was to understand the impact of different feature splits into the overall Meta performance, allowing room for movement through the constant and residuals. A sub-modelling approach allowed for the object detection features to have indirect effects on the KPI, through the Meta variable. Bayesian Optimization Methods were employed to find the optimal transformations for each variable. Each Sub-model is a linear regression, testing the impact of the appearance of a feature, or feature group, and its opposite (partner feature) against the total Meta performance. Since the features are not mutually exclusive (between 48%-66% of creatives contained at least two objects), they could not all be tested in the same model.

Furthermore, the daily impressions and spend per feature were split according to creative type (static, carrousel or video). That is, the impressions associated with a feature or combination of features, e.g., Person & Product, were split out by static, video and carousel. While it was not in the scope of the study, doing this allowed for further analysis into the impact of features by creative type. A sequential approach was followed in which each feature group was tested in isolation. Within each sub-model, the transformations of the features (lag, adstock, and diminishing returns) which maximized R2, and minimized p-values were chosen. The transformations that the Meta features follow were bounded to the following ranges: lag of 0-3, adstock of 0-50, saturation (K; S) of 0.1-0.8; 1-9.

An example of sub-model is shown below. 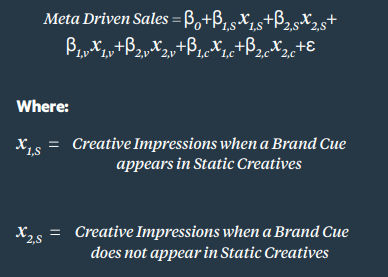 To manage the risk of results inaccuracy we made sure that:

The last step of the analysis centred around calculating ROIs and deriving ROI uplifts for each feature per brand, using the feature contributions from the sub-models and the associated spend.

This is used to:

Thanks to this methodology, we were able to find the most important and efficient features for each brand. As previously mentioned, this methodology can be adapted to many different audiences and uses cases. But data experts and industry specialists are the only ones who can create the path for success.

If you want to have a straightforward conversation, contact Ekimetrics’ data experts today. 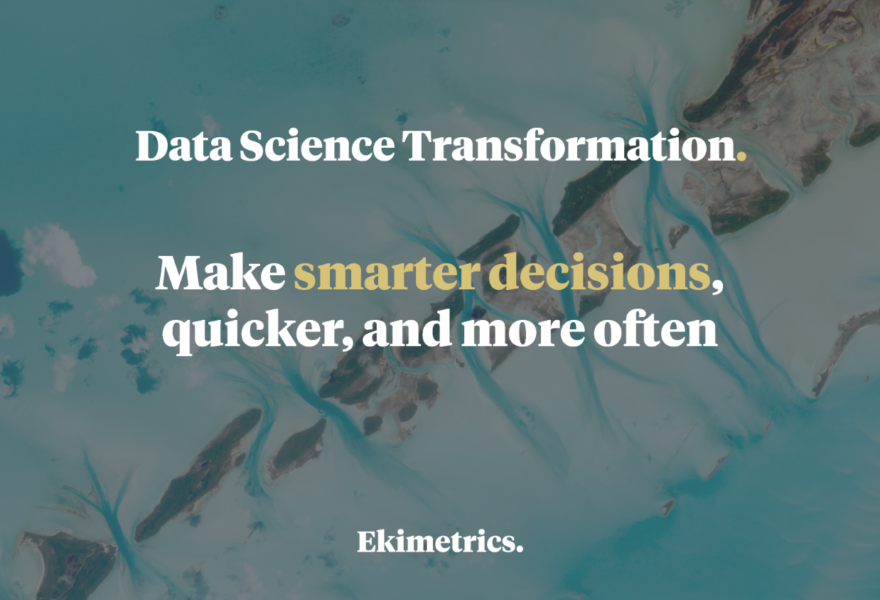 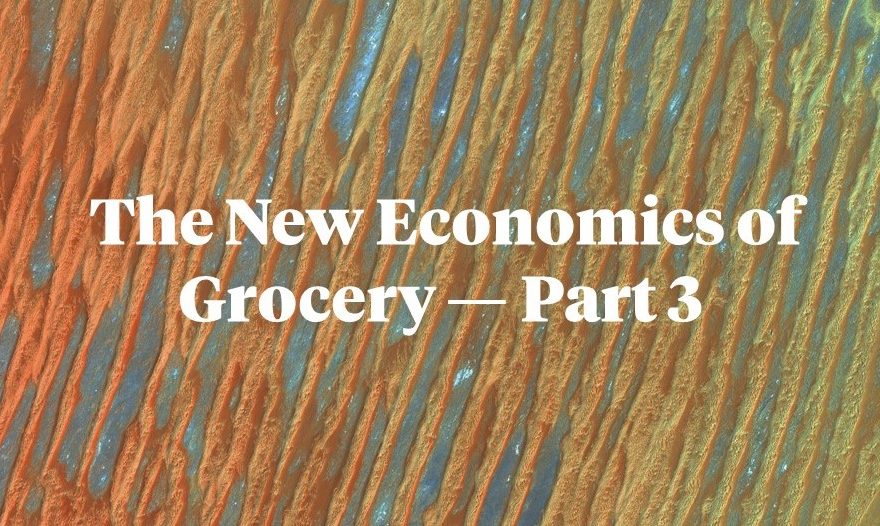 The New Economics of Grocery — Part 2 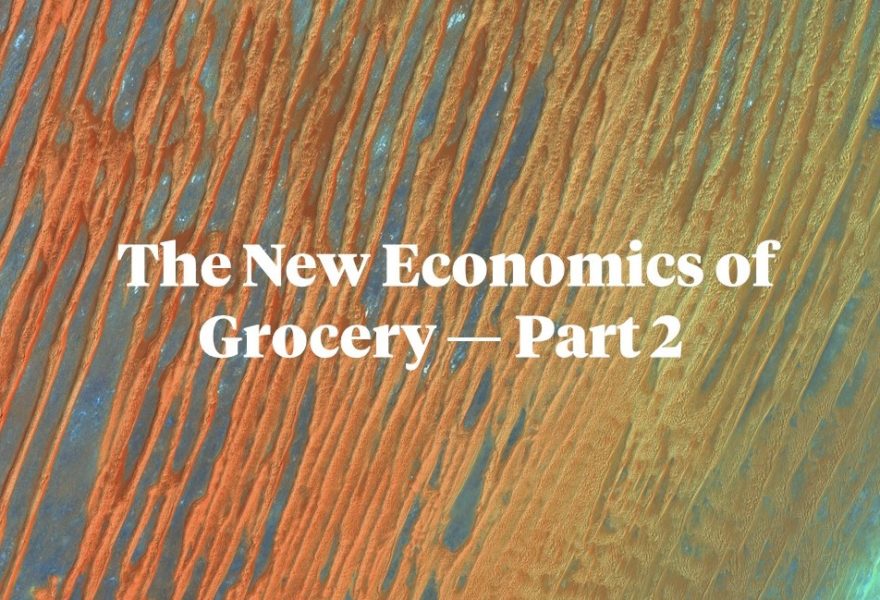